Previous Next
the Persian culture of hospitality

Thinking of the most attractive place in Iran, I cannot think of any place as attractive as Iranians’ heart. I have encountered many foreigners from different nationalities who have traveled in Iran and told me about the places they have seen, the great Persian food they have eaten, the varied nature of Iran, but one thing they were all agreed about is the population, the charming Iranians with their smiles and friendliness, their curious looks and questions, their honest invitations for a cup of tea or even a meal. It seems they have opened the window of their soul to any travelers who wants to know their culture and their country, past and present. 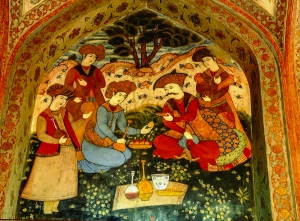 the 17th century painting in Chehel Sotun Palace in Isfahan

What is the root of this behavior? Where does it come from? And have Iranians always been like that?

In Persian we have a proverb that says “Guests are the friends of God”! which shows the importance of those who come to our home. This importance used to be influencing the traditional Persian architecture as well, since in traditional Persian houses or even not so long ago, in the urban architecture of the contemporary era, we used to have the biggest and the best room reserved for guests named as “Mehman-Khane” or “the guests’ chamber”.

Iranians have also many rules and regulations concerning the reception and serving the guests, including not to ask the uninvited guests if they have eaten something or not and just simply bring the best you have in the house for the guest and even though you are hungry it is rude not to eat with your guest since s/he might feel shy and not to eat either.

If you invite a guest, regarding their importance and their number and the occasion, you need to cook several different meals and bring them with special care and beautiful decoration in specific order so that your guest would feel special and respected. May be the best reference for these complicated regulations and rules is watching the movie named: Mum’s Guests or Mehman-e Maman.

If you are coming to Iran as a foreigner it is very probable to have the chance to interact with the Iranians. In fact, Iranians are not at all shy and they love to come forward and talk to you or offer their help or ask you some questions and then go on their way, and unlike some other countries this urge to interact is not for making you buy something (except in the Bazar which is normal to do so), or ask you for money, it is simply the pure urge to interact with a non – Iranian tourist.

Part of this urge to communicate with foreigners and specially with westerners goes back to Iranians’ knowledge of what is going on behind their back in the western media and the unjust and black image of their country and its population which is being broadcasted all over the world and shows Iran as a dry, ugly country with unfriendly and radical people; this breaks Iranians’ hearts that they do not have the media to defend themselves and the actions of a minority group is generalized over the whole population. Therefore, seeing a foreigner in their neighborhood gives them the opportunity to go over and talk to them, mostly an Iranian would first welcome you to Iran and will immediately ask you where are you from! Then they will probably name one or two soccer players from your country that they know and then will ask your opinion about Iran. 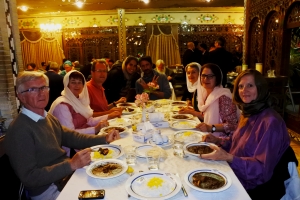 To be honest not everyone in Iran has a good English, except for youth in big and touristic cities such as Tehran, Isfahan, Shiraz etc. Yet this does not stop them from coming to you and talk to you even in Persian with a big smile, so it does not hurt if you learn one of two phrases in Persian to express yourself and make their day by the fascination over a Persian speaking foreigner! To have an idea of some useful Persian phrases while traveling in Iran, you check my other blog here.

Although during the recent years and with increasing the number of the tourists coming to Iran, this hospitable behavior has turned into a negative point in some cases, since I have sometimes encountered bongs and articles suggesting that you can travel in Iran without paying one cent!

As an Iranian I find this behavior absurd and wish that the reader of this article have the intelligence two draw the line between a friendly and honest encounter and an abusive one.

Moreover, in this article I am not trying to paint a one hundred percent positive image of the population of the country and in Iran, like everywhere, they are charlatans and liars, pickpockets and not so nice people, so the final judgment is on you and your impression of the country.