Iranian handicrafts; Modernity at the service of tradition

Previous
Iranian handicrafts; Modernity at the service of tradition

The Iranian traditional arts are well known to the world for their finesse and delicacy during the centuries, such as Persian carpet, calligraphy, miniature, Metallurgy, music, etc. There is so much information about them in books, magazines, and websites; However, this blog is not about introducing the Iranian handicrafts.

In a brief introduction, I intend to point at a unique feature of Iranian traditional art in general and Iranian handicrafts in particular that I find interesting. It is Its adaptation with today’s fashion trends and its popularity among the young generation.

Contrary to what we usually expect from traditional arts, costumes, and handicrafts, these items in Iran are not only to found in touristic villages or tacky jewelry shops on the tourist sites or only to be worn to take photos.

Iranian handicrafts still have a high value in the ordinary daily life of the Iranians, but its form has changed and adapted with recent trends. Most of the Iranian women are not making their carpets at home anymore, and even someone with a traditional costume in a city like Tehran might be a rare scene. But, once you step outside the big cities, you can still see people in their traditional costumes that they wear for hundreds of years, and people are very much involved in producing handicrafts for their daily life.

But let’s go back to Tehran, to the modern life of a young generation who listens to western music, who travels around the world, has a favorite western actor or actress, and uses social media to get connected to the world. Where is the place of traditional handicrafts in their life? Do they appreciate it and let it into their modern lives?

Thanks to many Iranian artists, Persian traditional art had become part of the lifestyle of the young Iranians. Some of these artists are universally known and praised, while some of them are known only in Iran. Here are some examples of the traditional arts adopted in the modern Iranian way of life.

The Persian carpet known for its technique and delicacy is the second major exported goods of the country, after oil. The traditional and symbolic motifs of the Persian carpets are still in high demand all around the world. Whether it is the classic urban motifs or the nomad motifs, which looks modern due to the geometric and minimal shapes, the Persian carpet adds eye-catching and yet refined beauty to a house with any style.

But this is not the whole story since the art of weaving carpet in Iran is continuing to evolve and find new directions. The new styles of Persian carpets are inspired by nomad motifs, calligraphy, and miniature, who follow the new trends in interior design. 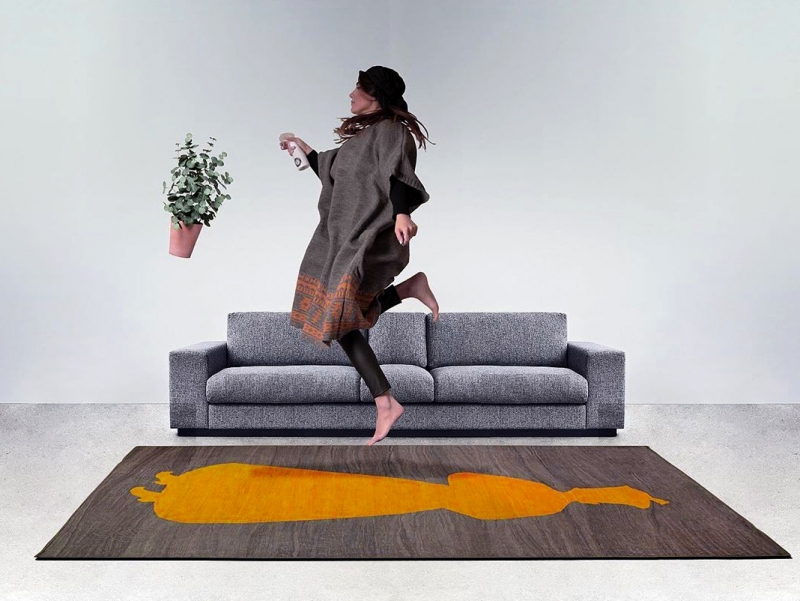 Several brands are weaving these kinds of carpets in Iran. Some of them such as Mirmola are weaving new handmade carpet with their specific motifs inspired by calligraphy, miniature, and painting characters. There are other brands like NimaNY who use old rugs and carpets to repaint and remodel and produce vintage, minimal carpets. 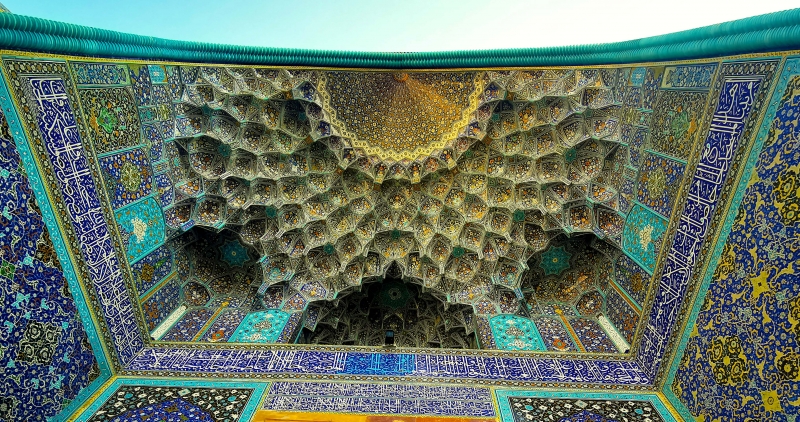 The magnificent portal of Shah mosque in Isfahan from 17th century decorated with ceramics and calligraphy.

Calligraphy used to be a method of writing stylishly, notably for writing religious texts or poetry and literature. It is also used to decorate important monuments like mosques, or palaces such as the Quran verses in mosques, the historical mosques of Isfahan are great examples. 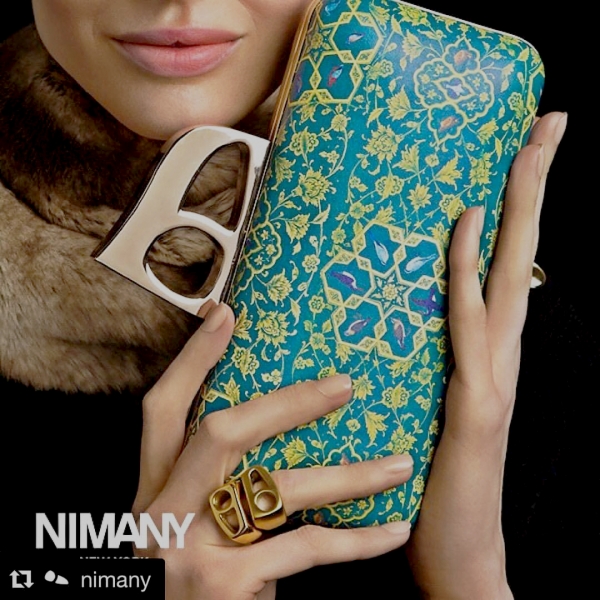 The NimaNY brand using the Persian alphabet, specifically the “H”, in their artifacts

The ornamental nature of calligraphy has made it possible for this art to remain one of the frequent inspiration of artists in different domains, nowadays calligraphy has expanded into different fields and turned into a muse for other artists.

One of the famous artists who use calligraphy in her photography and paintings is Shirin Neshat. She is a well-known artist, based in the U.S, in her art she is inspired by Iranian women after the 1979 revolution, and she uses calligraphy to convey her message. 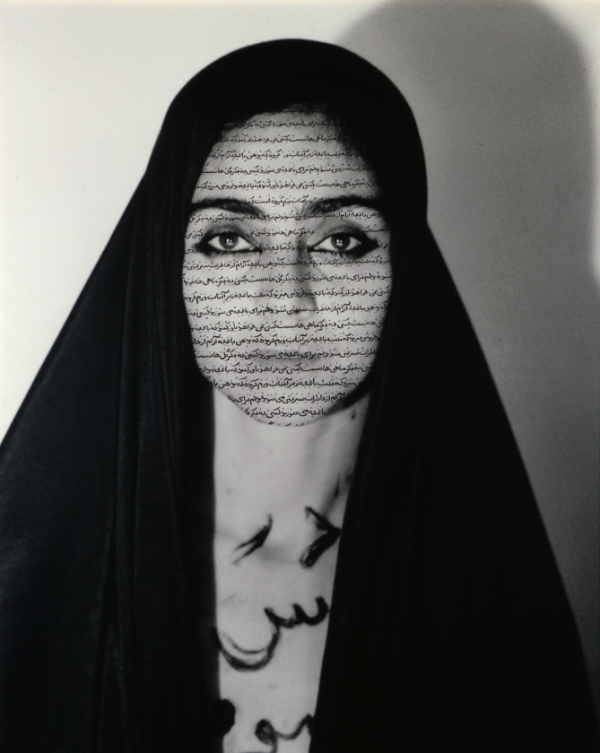 Shirin Neshat as a model of her art

However, there are so many other examples of using calligraphy in the daily objects that we use, like jewelry, shoes, scarfs, coats, and shirts, which go from low-quality mass production to the high quality and expensive brands.

The art of calligraphy is also a trend in interior design and decoration for offices and houses, which is probably similar to its function in ancient mosques. 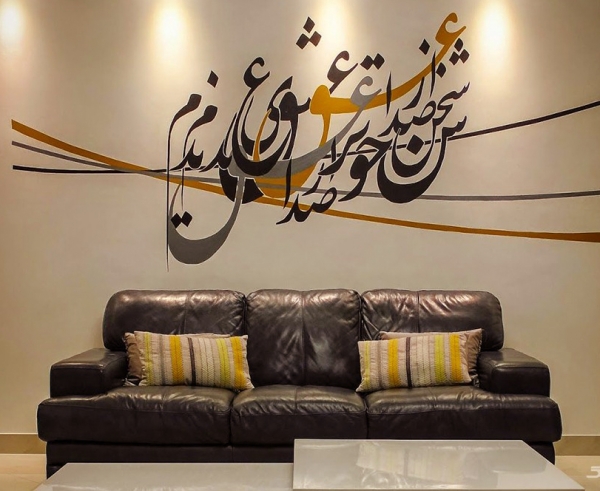 Pottery has a long history in Iran, and since 7000 B.C this artifact has been an inseparable part of Iranian history. Pottery and ceramics in Iran pottery are still an important part of people’s lifestyles.

The traditional types of ceramics are getting fashionable again, and also the modern inspiration is conquering the Iranian market, thanks to the Iranian creative artists. A great example is Farzane Studio, who is not only manufacturing ceramics as dishes but also for decorating buildings and furniture, which reminds us of the magnificent historical buildings. 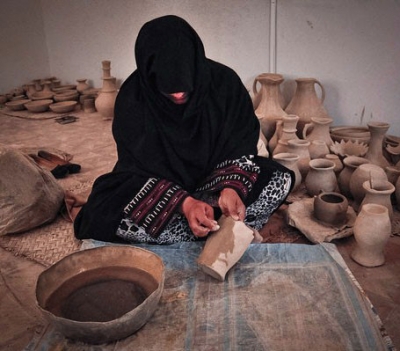 A Baluch woman while producing pottery

Promoting these beautiful ceramics by the new artists, led the old masters of ceramics to get into the highlight in the media and the market. The ceramics of Lalejin a village in Hamadan, ceramics of Meybod in Yazd, the ceramics of Natanz, and also the indigenous pottery of Kalpuregan are main examples. The last one has the unique feature of being hand-made through the whole process of manufacturing, and the motifs are original and have not been changed for thousands of years. 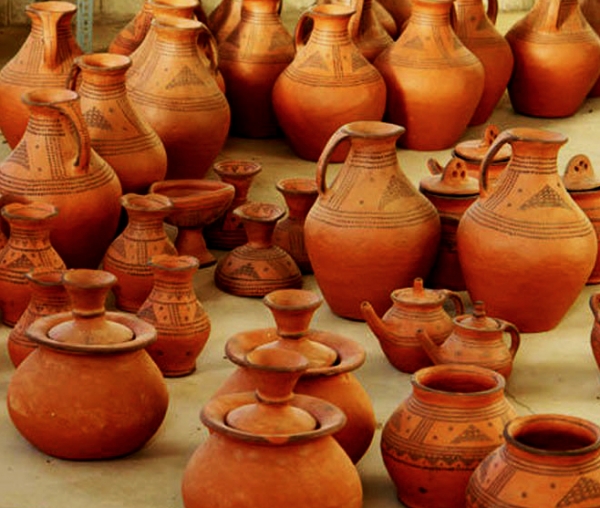 The Kalpuregan ceramic workshop in Baluchestan

In Iran, the embroidery has gone further than the traditional costumes of different ethnicities, and again thanks to the Iranian artists, their aesthetic beauty blends with the contemporary design and reflects the Iranian culture through fashion.

One of the well-known embroideries is from Sistan and Baluchistan province. This embroidery became famous by the last Iranian queen, Farah Diba who chose to wear Iranian designed clothes instead of wearing foreign brands to support Iranian artists. 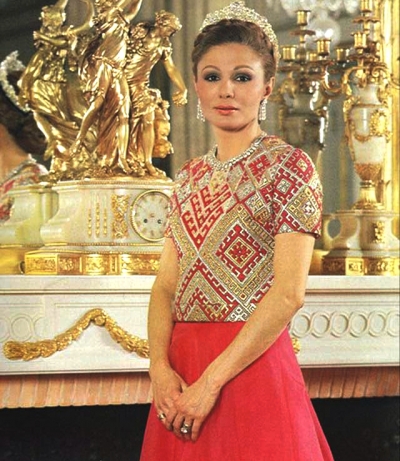 The Baluch embroidery did not remain only the queen’s dress, and during the last decades, thanks to social media, we witness the creative use of this embroidery not only for decorating women’s dresses but also jewelry and even men’s clothing. 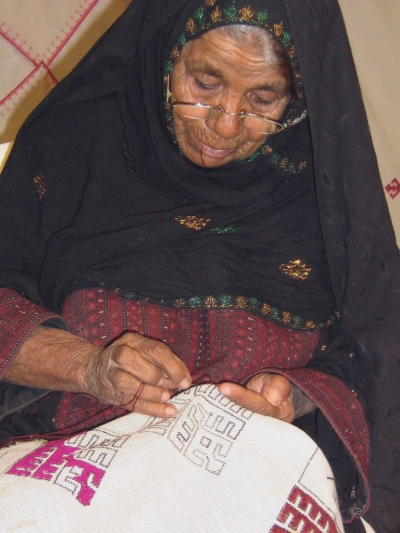 Mahtab Norouzi was one of the best artists of Balouch embroidery and thought this art for many young women. She passed away in 2012.

Another type of embroidery is Pateh, which is the specific handicraft of Kerman province. This embroidery had remained for centuries part of the culture of this province and used to decorate their houses. Just like the Baluch embroidery, Pateh also gained attention recently and spread everywhere in the country and used not only for decorating houses but even in the clothes and jewelry. 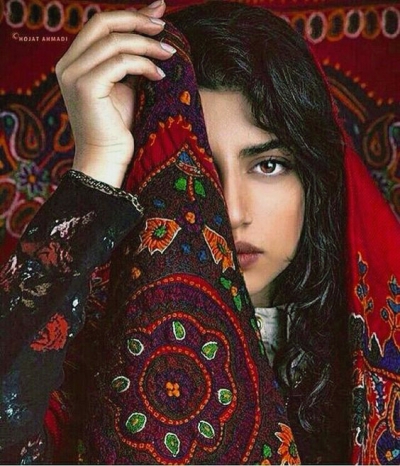 Pateh de Kerman is also a kind of embroidery which has become popular among Iranian youth.

There are so many other examples of handicrafts who are still present in Iranians’ daily life, like Qalamkar (hand-painted or block-printed cotton textile), enamel, and copper work.

The Iranian handicraft and traditional art, just like its classic literature and language is still omnipresent among Iranians all over the world. This feature is somehow unique in Iran for many reasons, perhaps it is part of the centuries of struggle for preserving the Persian identity. Whatever is the reason, handicraft is still part of our definition as an Iranian, and a piece of it can be found in any Iranian house.