Everybody knows Saffron as the red gold or the most precious and expensive spice by weight, and a kind of ingredient which needs special knowledge to deal with, or a kind of spice that you do not know how to consume it anyway and prefer to avoid it and admire it in a dish in a restaurant.

Saffron in Iran is well known as an Iranian spice, and it comes as quite a surprise for Iranian once they learn that it is cultivated in other countries like China, Spain, Morocco and even in France.

The Iranian Saffron, however, is pretty well known since Iran is one of the oldest places where this flower was cultivated and Iran is currently responsible for almost 90% of the global production.

Saffron is also interwoven in the Iranian cuisine, although it might seem hard to apply Saffron in different dishes, in Iran we will never run out of ideas for adding a pinch of saffron to infuse its magical odor and color into the plate. In this article, I am talking about Saffron, how it is cultivated, why it is so expensive, how it is used in Persian culinary and some tips about how to keep it last longer in your house. Flowers of Saffron blooming in October

Saffron is a small violet flower, growing in the semiarid regions. The reason is that the flower does not require so much water, actually, the farm is only irrigated twice a year. In Iran Saffron is being cultivated, famously in the northeastern regions of Iran such as Khorasan, and also the central region of Iran such as Natanz and Isfahan.

The best time for cultivating saffron is at the beginning of summer until august, which is the time to plant the saffron corms also known as bulbs in the soil, in 20cm depth. Once they cultivate the corms, they can last between 4 to 7 years or even 10 years in the soil and form new corms which will be dug up later by the farmer to be sold or be planted in another farm. Therefore, there is no need for the cultivation a farm each year over and over again.

Usually, the first flowers are appearing in the fall, about the end of October; the Saffron farm is one of the beautiful scenes of autumn in Iran, as nature goes to sleep, the ground is covered with the violet small flowers and the morning breeze is full of their perfume. Saffron flowers need to be picked up before sunrise and there are only two to three weeks to finish the job on the farm. 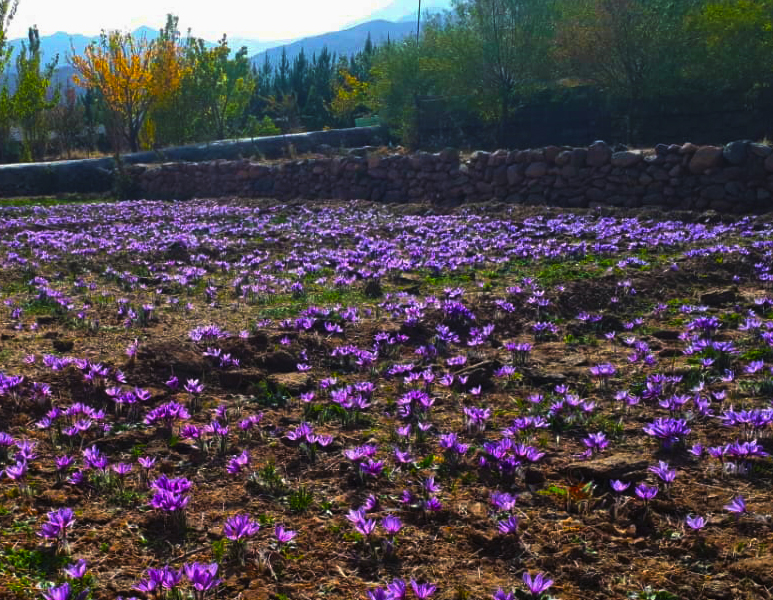 morning autumn in a Saffron farm in Natanz

Why Saffron is so expensive?

It is estimated that for one kilogram of the final product of saffron, 170000 flowers are harvested, each flower is hand-picked by farmers and immediately after the harvest they should carefully separate the flower from the stigmas, each flower produces only three stigmas, so you can imagine the volume of the hard work for producing the small amount of saffron. Later the stigmas are put to be dried in the shadow, to preserve their color and aroma.

The reason that Saffron is so expensive is for the hard human work that is required for cultivation and also for harvesting and especially for the final stage of separating the stigmas.

Different qualities of Saffron, how to recognize the real saffron from the fake saffron?

Once you take a walk in a spice Bazar in one of an Iranian city, you will easily find Saffron. But you might be surprised about the different prices that they might offer you for the same weight of saffron. Saffron has different qualities and different rankings based on the region it is cultivated in, and also different sections of the stigmas. 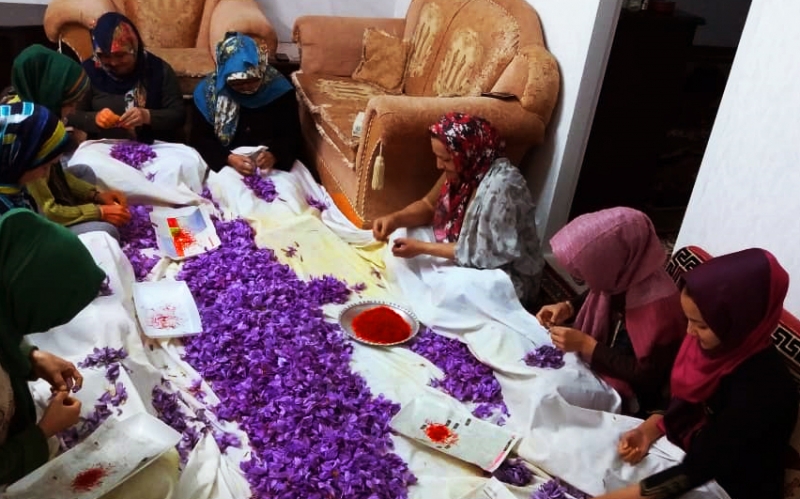 Once Saffron leaves the farm in the form of the small dried batches for packaging, the whole stigma is not being packed into one package, but the stigma is being divided into different parts. The upper part of the stigma which is the most reddish part is the most expensive section of the stigma and holds most of the odor and the color. This part which is actually what most people think of saffron and in Persian, it is called Sar-Gol (lit. The head of the flower).

As the most precious part, it is probable to find fake ones as well. There are some criteria to distinguish the real ones though, the real stigma of saffron needs to have small three dents, they should not be broken or crooked, they should smell quite strong and sweet, and once you rub them between your moist fingers, your fingers should turn orange or red. Unfortunately, there are herbs like the stigmas of sunflower or turmeric which look alike saffron stigmas, which are being colored and sold in Saffron packages, to be certain about the quality of your saffron, make sure to buy it from a reliable shop. 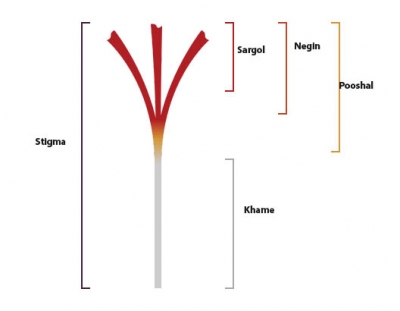 different sections of a saffron stigma

Another way to reduce the risk of buying fake saffron is to buy a type of saffron known as, Pushal Saffron, in the Iranian market. In this type of Saffron, the upper and red section of stigma is coming with a little part of the yellow section of the middle of the stigma. Although it might not be as beautiful as the whole and pure red saffron that we all have in mind, but it is harder to fake this kind of product.

The lower, white part of the stigma is not actually in the category of saffron, but it also holds a strong aroma and is usually bought and used in the cuisine once you want to add some odor to your food or sweet without spending much money. 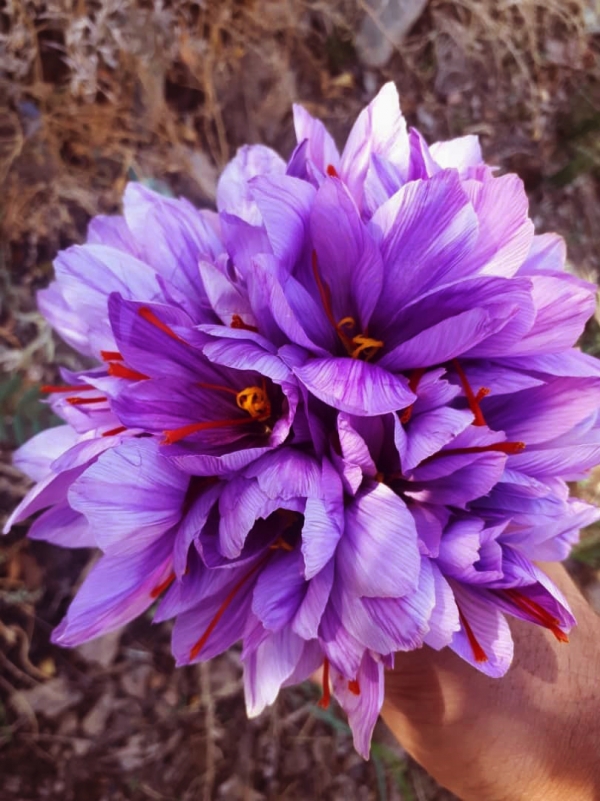 How to keep the Saffron spice to last longer?

First of all, there is a point that needed to be emphasized; Never buy the Saffron which is already turned in powder, because there is a great chance that what you have bought is not pure saffron. Second, even if it is truly saffron, its odor, and even color is not going to last long and it will turn to a red, useless herb after a while.

Always buy complete stigmas of saffron and turn it into powder just before adding it the dish. The package of saffron should be well-sealed, preferably in metal or glass, and it should be kept in a dry, dark and cool place, definitely not in the direct exposure to sunlight. 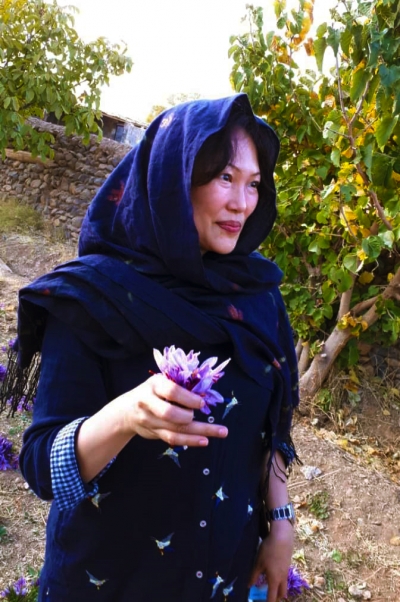 a visitor in the saffron farm

How to consume Saffron

Unlike many other spices, using saffron is not so direct, you might get some odor and taste if you just put a pinch of saffron dried stigmas into the pot but you miss most of it. To get the most out of Saffron, it should become powder and then be brewed in a little amount of hot water for a short moment. It is more common to use a stone or wooden mortar for smashing saffron with a very little amount of sugar or salt, which helps to have smoother powder. You can mix the powder directly into the other ingredients, or you can brew it for a very short time in hot water on the steam and once you smell the odor of saffron you stop heating, then mix the infusion with other ingredients.

How to cook rice with saffron?

Here is a short, simple and the most common way of consuming saffron in Iran. 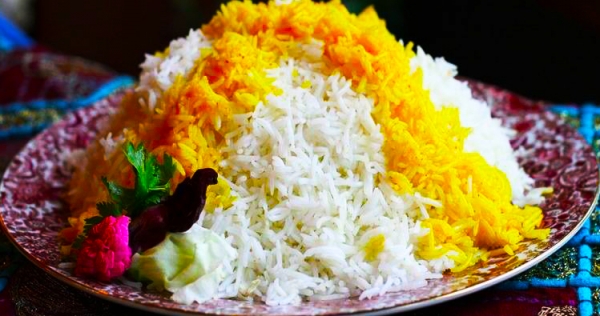 Rice is one of the main ingredients of Iranian culinary. Besides the amazing taste and odor as well as the golden color of saffron is used for decorating the plate of rice.

In Iran we usually put the rice in boiling water and add some salt and oil to the pot, we wait for about 7 – 10 minutes until the rice becomes soft, not so soft to be smashed but enough to be break easily between the nails since it will be cooked again. Then the boiled rice is being washed with cold water in a colander and again put the rice back slowly into the dried pot which is already covered with a thin layer of oil. Cover the lid of the pot with a towel and put it on the pot and wait for the steam to comes up. Once the pot is filled with the steam turn the heat very low and wait for about 20 – 30 minutes for the rice to be cooked and ready.

The second method is, after turning off the heat, you serve the simple rice in a plate and just take 4 – 5 tablespoon of cooked rice in a bowl and mix it with a little infusion of saffron, be careful not to add too much water in the infusion, and then decorated the plate of rice with the golden, saffron rice. As simple as that, your saffron rice is ready, you will see, taste and smell the difference. 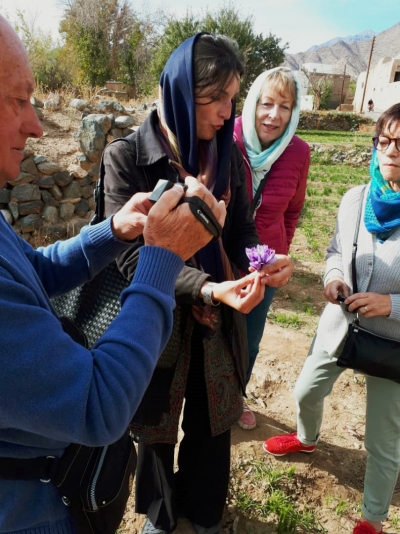 Do you want to participate in the harvesting festival of Saffron with locals in autumn?

please check here for more information about our Saffron harvest tours in Natanz nearby Isfahan.