Being a vegetarian, or cutting back on the consumption of meat, is becoming more and more a trend all over the world. Not only it is good for health but also it is good or even necessary for the planet. However, respecting a diet during the travel is always a challenge, especially if you want to try the local dishes and get familiar with the taste of the country.

You might have heard that it is not easy to be vegetarian in Iran, there is meat in most of the dishes and sometimes it is not possible to find something other than grilled meat or chicken in the menu, known in Persian as Kebab.

The fact is that Iranian cuisine is quite rich and varied, and it is true that Iranian eat a lot of meat, since there is no religious restriction, except on the Halal meat, and putting meat on the table is a sign of prosperity and welfare to many families since they can afford meat.

But there are still many traditional Persian dishes with no meat and suitable for a vegetarian diet or for those who want to try a vegetarian dish sometimes during their trip to Iran. In this article, I will talk about the vegetarian dishes that you will be able to find in the restaurants. Another point that is more like a personal observation is that for Iranian going to the restaurant and eating out is not something that we do every night and happens in specific occasions, except for some big cities where is culture is changing alongside the lifestyle. Therefore, an Iranian family who goes outside for a dinner to an Iranian restaurant prefers to order a meal that is less likely to be made in their house. Like Bonab Kebab, Bonab is a city in northwestern Iran, or a non-Iranian food like a French or Italian or Indian dish, or very probably fast foods like pizza. Therefore, finding the local and pretty easy and cheap to make dishes won’t be the priority of the restaurants as well.

That is why it is sometimes difficult to find a truly traditional Persian food in a restaurant’s menu. However, with the growth of the tourism industry as well as the growing demand for the local food among Iranians, the restaurants’ menus are also changing and the local foods are finding their ways from the private kitchens to the public tables.

Here are some recommended vegetarian dishes that you need to try during your trip to Iran, even if you are not a vegetarian.

As you may know, the rice is a very essential ingredient in Persian culinary and some people cannot finish a day without eating rice. However, the tradition of making rice has gone further than the rice simple rice you may have in mind and many other vegetable and ingredients can be mixed with rice and for a variety of different plates which are called “Polo”.

If you travel to the region of Fars, this variety can be even strange for the Iranians. tomato with rice, lentils with rice, Green bean with rice, cabbage with rice, a very delicious mixture of sweetened carrot and walnut with rice, and also a national wide broad bean and dill with rice which is usually served alone or with fish.

All of these wonderful and delicious dishes are cooked with local spices and served with a type of salad known as Salad Shirazi, a mixture of tomato onion and cucumber with dried mint and lemon juice. 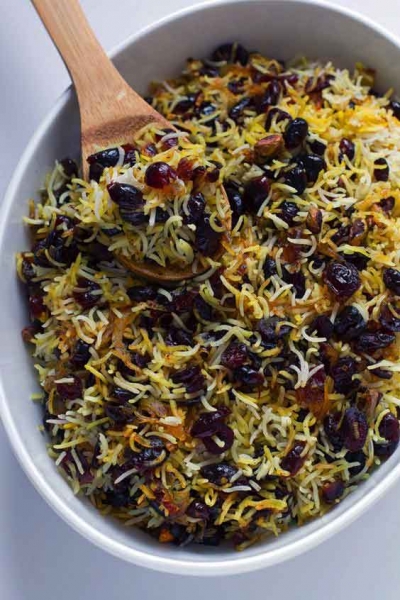 Most of the dishes including eggplant (translated as Bademjun in Persian) are originated from the northern cities of Iran, such as Rasht, known as the food paradise of Iran. Amongst them are some vegetarian dishes as well which are very popular among Iranians, and each region had developed them in different ways.

Kashk- Bademjun; a very popular dish in Iran which is something served as the appetizer but most of the Iranian are so fond of it and prefer it as the main course. It is a mixture of fried eggplant, dipped in a type of sauce known as Kashk, mixed with fried onion, garlic, walnut, and dried mint. 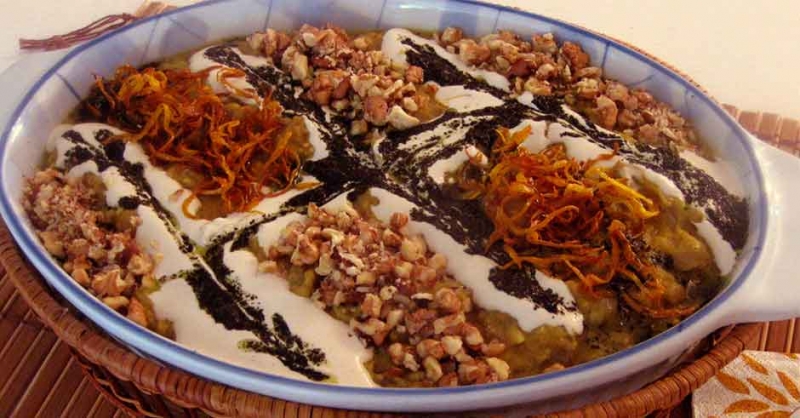 Mirza-Qasemi; another northern Iranian dish, which is made of grilled eggplants mixed with boiled tomato, eggs, and spices and garlic, all smashed together and well mixed.

Yatimche; this dish is very similar to the previous one in terms of ingredients since this one the ingredients are all fried and mixed with a little amount of water and is more like a stew.

In Persian omelet has only one meaning and that is the mix of egg and tomato. Other foods mixed with egg and fried are known as Ku-Ku. Almost anything can be turned into a Ku-Ku, once smashed and mixed with eggs. Some of the most popular ones are as below.

Ku-Ku Sabzi (vegetable omelet); the word Sabzi in Persian means vegetables. This very delicious dish is made of a mixture of six different vegetables with precise percentages, eggs, spices and sometimes walnut and raisin. Later the mixture is being fried and served with some yogurt or salad.

Ku-Ku Sibzamini (Potato omelet); this Iranian fast food is made of boiled potato and eggs, but again they can be mixed with different spices and other ingredients like walnut and raisins.

There are other types of Ku-Ku as well, like the Ku-Ku of Zucchini, Ku-Ku of Lettuce and Ku-Ku of Carrot, which is less likely to be found in restaurants.

Āsh is a kind of thick soup or stew, however, I put it in a different category since for Iranians it is neither soup or stew. Āsh is an umbrella term which describes a variety of dishes in each region, that sometimes the only common thing about them is their likeness to soup or stew but with totally different ingredients. 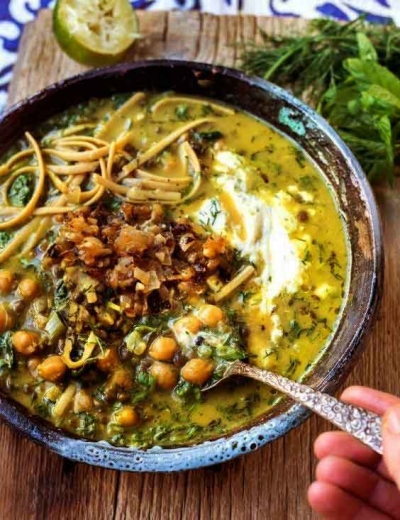 Āsh Reshteh; one of the well-known types of Āsh is the one with flat wheat noodles, and cereals like a kidney bean, chickpea, lentils a mixture of vegetables and Kashak, the dish is usually served with a garnish of fried mint oil, garlic and onion chips on the top.

Āsh Doogh; a northwestern specialty such as the cities of Tabriz and Ardebil as well as countries like Azerbaijan and Turkey. The base ingredients of the dish are more or less the same as the previous one, except for the noodles. Also in this dish, they use another type of dairy, Doogh which is like a savory soda yogurt. Sometimes they add meatball in this Āsh which is not very common.

Āsh-e-jo (barley soup); for cooking this type of Āsh, the aromatic and special vegetables such as leeks, parsley, coriander, dill and cereals such as peas, beans, peeled barley, and onion are being used. As usual, the dish is mixed with a dairy product, Kashak and topped with fried mint, garlic, and onion chips. This is mostly a winter, street food.

The variety of Āsh is incredible and sometimes unknown to many Iranians. if you check the Persian Wikipedia page of this dish you will see a list of more than fifty different types of Āsh, coming from different regions of the country or entered from other countries and culture.

The stews with a side dish of rice, salad, and pickle are the most common Iranian dish, however, it is hard to find many meatless stews. Usually, the meat is not the main ingredient of the stew and the dish is fine without meat, but they add it anyway. Therefore, you should know that most of the Iranian stews can be cooked without meat and the taste is not going to change drastically.

Here are some originally meatless stews mostly coming from the north of Iran;

Baqali-Qatoq stew; This stew is very easy to make and very healthy and delicious, the main ingredients are fava beans, fresh dills and eggs, spiced with garlic, pepper, and turmeric. The stew is best to be served with Iranian rice.

Torshi-Tare; another meatless, northern dish which is a mixture of aromatic vegetables, rice, garlic, eggs, wheat flour, orange juice, and spices. The stew is sometimes served with a piece of smoked fish and Iranian rice on the side. 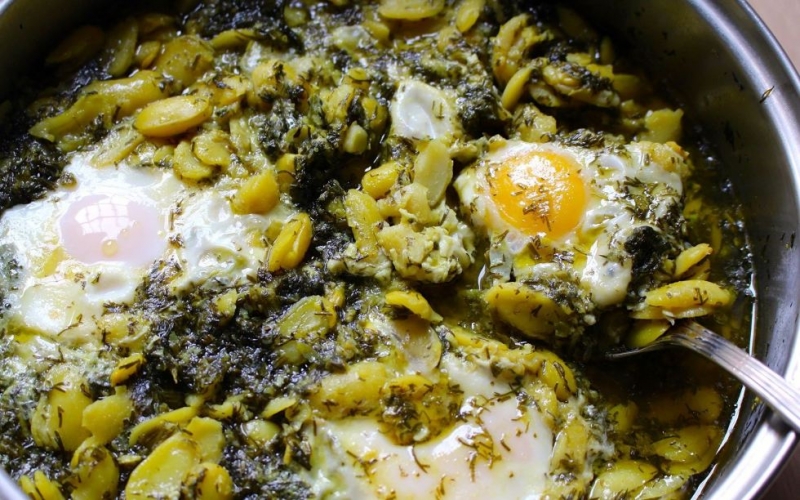 stew of dill and beans

The Khoorak is hard to translate, this is attributed to a variety of food, being served with no rice and usually with bread on the side.

Do-Pyaz-Aloo; Although the same exists in India with the same name, in Iran it is known as a Shirazi meal, made of potato and tomato with onion and spice.

Eshkeneh; or Persian Onion soup, is originally a northeastern dish, but popular all over Iran. The soup is made of onion and garlic, dried mint and eggs, flavored with walnut sauce and pomegranate juice. The soup is served in restaurants as an appetizer but it is perfect as a light meal.

Kaleh-Jush; this dish is also in the form of soup originated from central Iran. The main ingredient of this dish is Kashk, as previously explained a thick and sour dairy product, mixed with onion, mint, walnut, and water. The dish is served with bread as an appetizer or a light meal.

Lentils/red bean soup; these two types are soups are better to be categorized as street foods in winter and autumn. However, in the breakfast menu of the restaurants and hotels, a warm bowl od lentil or bean soup is also prevalent.

Ab-Doogh-Khiar; contrary to the previous dish, this dish is a cold summertime dish. This is a very light, cold soup and rich in nutrition, perfect for the hot days of summer when heavy food is not tempting. Although it is really simple to make, the freshness of the ingredients is a very important point. The ingredients are cucumber (Khiar), cream, milk, yogurt (or doogh), fresh vegetables like mint and basil, radish, scallion, raisins, walnuts, salt, and pepper. All the ingredients are carefully mixed and the dish is served cold with bread.

Falafel; the next three dishes are probably already known to you from the Arab restaurants. In Iran, these foods are originated from the Iranian-Arab regions in southwestern Iran. The Persian Falafel in less spicy than the Arab version and is usually served as street food in sandwiches.

Samosa; this is a fried or baked dish which has spread all over the middle east and northern Africa, China and India. Depending on the region the Samosa is coming in different shapes and with different fillings. However, it is mostly vegetarian food and is a thin layer of bread filled with potato, onion, and tomato and fried in oil.

Hummus; although being originally a Lebanon dish, is a very popular dish in Iranian restaurants as the appetizer. Hummus in Iran like the usual Hummus is made of cooked peas, olive oil, tahini, lemon juice, and crushed garlic, and is a very popular appetizer in the middle east.

Borani; Borani is an Iranian appetizer which is made from yogurt mixed with eggplant, spinach or zucchini. Though being served as an appetizer, for many Iranians it is a summertime, cold dish.

Olive dipped in pomegranate juice and walnut (Zeytoon Parvardeh); this is a must-try food sider in Iran. Although originated from northern Iran, it can be found anywhere in Iran. As its name indicates, it is olive mixed with a combination of aromatic fresh vegetables, chopped walnuts, pomegranate molasses. This delicious food sider is usually served with food, as an appetizer, or if you are a foody like me, as a main dish with some hot bread.